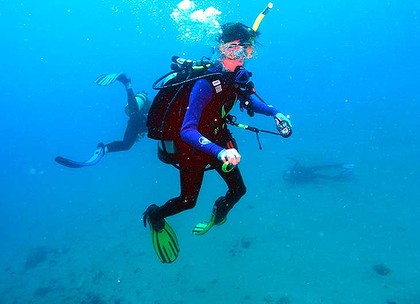 Tragedy ... Tina Watson is seen lying on the sea floor.

One of the world's leading experts on diving deaths believes Tina Watson, an American whose honeymoon death on the Great Barrier Reef seven years ago sparked a controversial murder case, was the victim of a simple diving accident.

Dr Carl Edmonds claims "a grave injustice may have been done" in relation to Tina's husband of 11 days, Gabe Watson. He was charged with her murder by a Queensland coroner after a month-long inquest but served 18 months in jail after pleading guilty to her manslaughter.

Watson is now fighting fresh murder charges in Alabama related to his wife's diving death, after he was deported to the US last year.

Sydney-based Dr Edmonds, who co-wrote Diving Medicine for Scuba Divers, and has written specialist journal articles on more than 100 diving deaths, told the Herald that Watson's account to police of the events underwater on October 22, 2003, "all fits together very reasonably in a simple, straightforward diving accident".

Tina Watson, 26, of slim build, was "grossly overweighted" with nine kilograms of weights for her first ocean dive - more than twice what she needed with the equipment she was using, he said.

After analysing her husband's statements to police, together with other medical evidence and equipment reports given to the inquest into Tina's death, Dr Edmonds believes the novice diver did not inflate her buoyancy compensator vest - as all experienced divers would have done automatically - while descending to about 15 metres, above the wreck of the SS Yongala, south-east of Townsville.

This meant that when she reached the bottom of the descent line, Tina would have been "very, very negatively buoyant, like really, really heavy" and would have begun to sink - and panic.

Dr Edmonds said that a short press of the inflator button on her buoyancy vest, as Watson told police he had seen, would not have been adequate at that depth unless depressed for a considerable time. In her ensuing panic, Tina had probably over-breathed her regulator. This led to an intake of water, loss of consciousness and drowning, while her regulator remained in her mouth, according to Dr Edmonds.

After studying Gabe Watson's dive computer data print-outs, he said Watson's perceived slow ascent to the surface, in what was an emergency situation, could be explained. Gabe Watson had not ascended vertically, as did the master instructor who found Tina on the ocean floor several minutes later and got her to the surface from 27 metres in 90 seconds.

Gabe Watson, who had already drifted away from the wreck and the descent line, had ascended at an angle towards the line - as well as against the current - to shout for help. The 192 centimetre-tall, and bulky, former high school footballer "probably did very well to get to the surface in the time he did, [estimated at the inquest to be about two minutes]", according to Dr Edmonds.

In several statements he gave to investigating police, Watson said he had let go of Tina because she had dislodged his mask as he towed her, against the current, to the descent line. By the time he replaced the mask, he claimed she had sunk up to three metres below him. He gave differing versions of why he left her and went to the surface.

''If you listen to Gabe's story, it is very consistent with a really straightforward, panicking diving accident,'' Dr Edmonds said.

"It's all very plausible. In fact, it's like so many other diving accidents".

The emphasis by authorities on Watson's certification as a rescue diver meant "nothing", Dr Edmonds said, unless he had been trained to rescue overweighted divers in an environment similar to the ocean currents of the Great Barrier Reef.

With its changing currents, the Yongala site was an unpredictable "difficult, often dangerous dive", he said. Watson had learned to dive in the fresh, still waters of a flooded quarry in Birmingham, Alabama, and received his rescue certificate four years before his wife died.

Last November, after his release from jail, Watson was deported amid a political imbroglio, but only after the US gave assurances to the Australian federal government that he would not face the death penalty in his home state of Alabama, if convicted of the two counts of capital murder, with which he has since been charged.

Now 34, he was due to face trial last month. But significant budget cuts affecting court security in Birmingham have caused the postponement of his trial to perhaps next year.

US prosecutors allege that Watson planned his wife's murder in Birmingham for financial gain from insurance policies, and effectively kidnapped her by allegedly taking her to Australia on her honeymoon without revealing he intended to kill her.

Dr Edmonds is also the senior author of the international textbook Diving and Subaquatic Medicine which was cited several times during the month-long inquest, that ended in 2008, into Tina Watson's death .

He was contacted by investigators during inquiries into her death, but was not called as an expert witness. He suspects this may be due to parochial preferences for local Queenslanders - and for financial reasons.

Dr Edmonds says when initially contacted by investigators he "simply answered questions of fact saying what should happen, not what did happen'' in relation to issues including ascent rates in emergencies. He now believes they ''may have misinterpreted what I have said and applied it to him [Watson], when it really didn't apply''.

Most diving accidents and deaths "could have been prevented had someone acted differently", he said. And weights not being ditched occurred in about 90 per cent of them.

There was little chance of Watson getting his bride to the surface when she began to panic in the current unless he ditched weights, preferably hers, or inflated one of the buoyancy compensators, preferably hers, said Dr Edmonds.

But Watson did neither. Nor did he say he had panicked, as the Queensland Court of Appeal later found he did. This gave rise to allegations of foul play, compounded by different versions he gave to others of why he left his wife.

Another diver from a different boat had witnessed Watson from above as he appeared to embrace Tina, in obvious distress and moving weakly in a horizontal position, before he went towards the surface.

Tina's family were outraged by Watson's jail term and believe that the embrace was a "bear hug" that enabled him, motivated by greed for her life insurance policy, to reach under her arms and turn her air off from behind and then turn it back on again before she sank to the seabed.

Two months ago, another expert, Queensland veteran diver Col McKenzie, publicly retracted what he initially told police. Mr McKenzie now thinks Watson was incompetent and inept, but not a murderer. He had been presented with certificates and diver logs, not shown to him by police, which revealed Watson had little ocean diving experience.

Dr Edmonds believes Watson's murder charge and manslaughter jailing may be "a miscarriage of justice".